The U.S. dollar stood tall on Thursday, supported by firm domestic data and hopes the coronavirus economic impact could be limited, even as the human toll continued to climb.

Another 73 people on the Chinese mainland died on Wednesday from the outbreak, the highest daily increase so far, bringing the total death toll to 563.

Infections stand at 28,018. Drug-makers and the World Health Organisation played down press reports about progress toward finding treatments, which had boosted traders’ confidence.

Amid the uncertainty about the virus, currency investors also turned their attention to traditional market drivers, specifically U.S. private payrolls, which posted their biggest jump in nearly four years, while a separate report showed a service sector pickup.

That helped the greenback higher and it drifted north in morning trade to a two-week high of 109.87 Japanese yen .

It sat at $1.0994 per euro, just below a one-week peak touched overnight against the common currency, while the Australian dollar inched ahead by 0.1%.

Overnight the S&P 500 made a fresh record closing high and the dollar hit a two-month high against a basket of its peers.

Yet plenty of caution remains elsewhere, with oil prices stabilising but making only a cautious recovery with the size of the expected hit to demand still growing.

Elsewhere the British pound sat at $1.2991, while the Swedish krona jumped against the euro after a better than expected manufacturing survey sent it 0.5% higher.

Thu Feb 6 , 2020
By  Administrator_India, Capital Sands Indian Prime Minister Narendra Modi and his party this week face their first electoral test since deadly anti-government protests erupted nearly two months ago, with the divisive turmoil likely to win them votes at polls in the capital. Modi’s Hindu-nationalist BJP won a bigger majority in […] 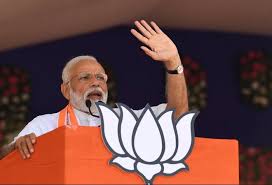