The U.S. economy created the most jobs in seven months in March as more Americans got vaccinated and the government doled out additional pandemic relief money, marking the start of what could be the strongest economic performance this year in nearly four decades.

Shorter-dated U.S. Treasury yields held near a 14-month peak, while the dollar was poised to extend gains against major currencies on Monday after the U.S. Labor Department reported stronger-than-forecast jobs growth in March.

Gold is seen as a hedge against rising inflation, but firmer Treasury yields, which translate into a higher opportunity cost for holding bullion, have challenged that status.

Despite the strong numbers the data will not alter the Federal Reserve’s stance on monetary policy, Steven Ricchiuto, U.S. chief economist at Mizuho Securities USA in New York said.

President Biden’s $2 trillion infrastructure plan initiatives are widely popular, according to a Reuters/Ipsos poll, but U.S. public support declines when the initiatives are packed into a Democratic bill and sold as a Biden-backed plan.

However, new COVID-19 restrictions in France will impact economic growth this year but it is too early to say by how much, Finance Minister Bruno Le Maire said on Friday.

Japan’s services sector activity fell in March, a private survey showed, but taking some shine off the precious metal were signs that the pace of the downturn was the slowest since January 2020.

Money managers in the gold, silver and copper markets cut their net long futures and options positions in the latest week, according to data from the Commodity Futures Trading Commission.

Tue Apr 6 , 2021
By Administrator_ India Capital Sands Growth in manufacturing slowed to the lowest rate in seven months, as increasing Covid-19 cases hit demand, said IHS Markit’s purchasing managers’ index (PMI) on Monday. PMI fell from 57.5 in February to a seven-month low of 55.4 in March. In the PMI lexicon, a […] 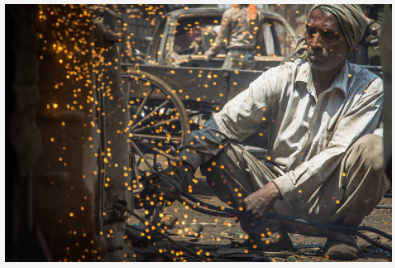