The yen and the euro were on the front foot against the dollar on Monday as traders raised their bets of an interest rate cut by the U.S. Federal Reserve this month to shield the economy from the rapid spread of the coronavirus.

As U.S. shares were routed in recent days, Federal Reserve Chair Jerome Powell said on Friday the central bank will “act as appropriate” to support the economy in the face of risks posed by the coronavirus epidemic.

Investors took his comments as a hint that the Fed will cut interest rates by at least 0.25 percentage point at its next scheduled meeting on March 17-18.

There is even increasing chatter of an unscheduled move, with a U.S. bank lobby economist saying a coordinated global interest rate cut by the top central banks could happen as early as on Wednesday.

The expectations around the Fed underscored the speed and scale of the virus’ spread from China through to dozens of countries and the potentially crippling blow to the global economy.

Investors expect the dollar’s yield advantage – a key support for the U.S. currency – to shrink as the European Central Bank and the Bank of Japan are seen as having limited room for further cuts given their rates are already in negative territory.

All the same, highlighting the risks posed by the virus, BOJ Governor Haruhiko Kuroda issued a statement to say the central bank would take necessary steps to stabilise financial markets, helping to curtail the yen’s earlier gains..

Sterling traded little changed at $1.2828, not far from its 4-1/2-month low of $1.2726 hit on Friday and stood near its lowest levels since October against the euro and the yen.

Talking about life after the divorce: EU and Britain set for new talks

Mon Mar 2 , 2020
By Ritu, Capital Sands Britain and the European Union kick off talks on Monday on how their relationship will shape up after Brexit, with half a trillion euros worth of annual trade and close security ties at stake in what are bound to be tense talks. Both sides say they […] 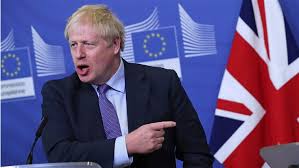